Today I’m going to jump forward right to the present! We have recently made a new friend by the name of: @denemichael  If you think I’m deluded wait until you meet Dene! To give you an example he thinks he’s a singer in a band by the name of Black Lace. I have looked this band up and they had a number of hit songs, one of them being Agadoo. Dene calls himself Mr Agadoo! I’m quite sure you humans are aware of Black Lace and this Agadoo song but we Grimniens are quite new to your planet and therefore were not aware of this wonderful song until now. I now understand why he keeps referring to pushing pineapples and shaking trees! Such wonderful lyrics! If you are a budding songwriter I urge you to listen to this song, you can learn so much about your art from this Black Lace group who Dene imagines he is part of.

Now, we Grimniens are not cruel so we play along with him. After all we all have aspirations to be famous – apart from me of course because I am a megastar! – So we humour ‘Mr Agadoo’ and pretend that we believe he is the singer in this group! Let him have his dream, that’s what I say, he’s not harming anybody is he? Unless…….well I just hope he isn’t cashing royalty cheques intended for the REAL Mr Agadoo, that would be quite naughty of him especially if real Mr Agadoo is busking on some street corner somewhere in order to feed himself!

If that’s not bad enough he FAVOURITES his own tweets! Don’t believe me? Go and follow him and see for yourself! I tackled him about this and he said that he is his favourite person! Have you ever heard anything like it?…………….

Now, you know how our ‘Hall’ likes to give people twigs? Most people just accept their twigs gracefully – if somewhat bemused – then don’t mention it again! Not our Mr Agadoo! Oh no! He thinks his twig is alive! <Holds tummy and roars with laughter> He took it to his ‘imaginary’ show in Blackpool and appeared on stage with it! I would love to have been there to see the audience reaction. Dene seems to have developed quite a bond with Hall, which explains a lot about him really! They ‘get’ each others humour. He keeps posting photographs of the twig ‘having fun’ on his timeline! Don’t believe me? Follow @denemichael   and see for yourself. 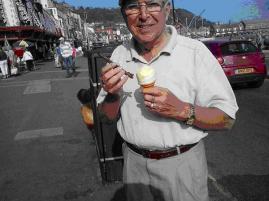 As if that isn’t bad enough…..he’s roped his poor old unsuspecting dad into his madness. He’s been down in London recording a television programme this week – so he says – and he had his dad babysitting his twig. <puts head in his hand and shakes it in disbelief> Poor Dene’s dad has been taking photographs of the twig in various places, on the fair, at the seaside riding a donkey, playing hide and seek………I think you get the picture! And you humans wonder why your seniors get confused!

Furthermore……..the REAL Mr Agadoo has a radio show on Saturday nights on Minster FM…..http://www.minsterfm.com  or 104.7 fm Dene tells everybody it’s HIM on the radio! After saying that he must know the disc jockey on the show because he has kindly offered to showcase some of ‘our’ unsigned artists on a future programme. He SAYS he is talking to the show’s producers about it………

To humour Dene I posted a picture of a homeless twig on my timeline saying it was all very well him posting tweets about his ‘privileged’ twig but that I’d seen this sad, abandoned twig sleeping rough.

I can’t BELIEVE the furore that followed!

Mr Agadoo <ha ha> hoped I gave the twig a ‘good home’ and Hall demanded I go back immediately and rescue it!I tell you folks, if you thought we Grimniens were strange……we have NOTHING on you humans!

The man is totally bonkers……..which is why he talks to us I suppose!

I leave you now with the REAL Black Lace:

PLEASE! Can we have some sensible followers now………….

I do apologise Mr Michael, sir. Gongleshanks insists on ‘helping’ me by interfere…..erm writing chapters for me!

Gongleshanks! Dene Michael IS a highly respected celebrity! He IS the singer with Black Lace, he DOES have a show on Minster FM and he is HUMOURING Hall! You really need to show some respect young imp!”

OH NO! Not YOU as well Steve Bob!